Zeroing, also known as sighting a rifle scope, is the primary goal of adjusting the sights. That is to enable the projectile to be in a predictable impact position within the sight picture.

Learning how to sight can be a daunting task that may require one to undertake several lessons. Making the adjustments will lead to the production of accurate and precise shots and save on the ammunition as well.

How then does one achieve this target? In this article, I am going to take you through the procedure of zeroing a scope on a .22 rifle. Read on for more information.

I would point out that you cannot begin to zero a scope before installing.

The first step is to mount the base and the rings to the scope. Make sure that the gun base is of good quality so that it will remain stable for many years to come!

The installation involves tightening of the screws into the mount and according to the direction of the manufacturers. Tighten the screws loosely but continuously while making the necessary adjustments, if you have to!

The second step is to mount the scope on the rifle. You will also need to follow the manufacturer’s guidance while doing that. Make sure that the eyepiece is in the correct position when proceeding with the work.

You will need a level indicator to check on the evenness of the setting. When you achieve this, then you should tighten the rings firmly so that it remains in place.

The third step is to place the eyepiece in the correct position while at the same time setting the distance of the eye to match the shooting position! As you make the adjustments, make sure that the image which you get through the eyepiece is sharp and clear.

The fourth step is to level the cross-hairs. Do this procedure while holding your .22 in a steady position. Rotate it until you achieve a vertical one at the top dead center, resembling a midday time in the clock!

The fifth and the last step of mounting the scope is to tighten the mounting base securely. Make sure that you do not tamper with the position of it as it should remain at the top. Fasten each screw half-way while continuously checking on the location of the cross-hair.

The next step is to set the zero, or to sight, as you now have the system in place and ready for the task. 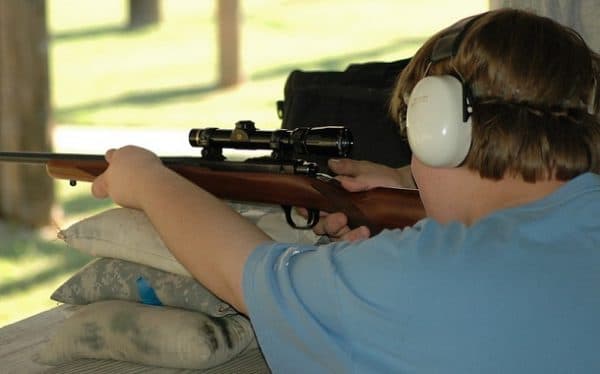 Head to the range.

When doing this, you should always practice firearm safety to protect your eyes and years from damages!

The shortest and surest way to stability is setting the gun to a rest. That means you will be shooting from a fixed position.

The rest does not necessarily mean that it is a special-purpose machine, but you can even stack several books to create one! You can always dismantle it after the exercise and set it later when you need to shoot again!

In all the instances, make sure that whatever you are using as a gun resting point should not be having a bolt. That is because it might unbolt and make the setting unstable.

Load the rifle with bullets, and test the accuracy.

At this point, the gun must be stable and the cross-hairs pointing directly to the target. Proceed to load it with a few bullets, probably between five and ten pieces. Wait for the signal that the range is hot.

After that, look through the scope while trying to maintain the eye to the spot. Disengage the safety pin on the rifle and hold the trigger for a split second. Squeeze it firmly without jerking.

Release one bullet at a time while checking on the accuracy or the point where they hit. Assess its location to the bull’s eye after five rounds of shooting!

After the first round of shooting, walk straight to the target and check on where it hit. First, wait for the signal that the range is now cold. Do not leave bullets in your rifle while on the mount to avoid accidental shots by people who might not be aware that you are on the target side!

There are two ways to examine the target to find out your performance after the exercise. The first is to retrieve the target and check it physically. Secondly, you can check on your accuracy through the range sight on your rifle.

I would advise you to assess your performance through the scope to avoid disturbing it if you are to continue with target shooting!

Load the gun and make further adjustments through the knob.

Return your gun to the rest if you had taken it off. Proceed to load it with bullets similar to that of the first round. Before beginning to shoot, make the necessary adjustments through the knobs while keeping an eye on the bull’s eye.

After that, make a few shots, probably about five, and the stop to assess your accuracy. If you are not yet near the target, you will need to readjust and repeat the process in its entirety.

To understand if you are making progress, mark with different color spots from the first and the second round of shooting.

You can, for example, choose a green mark for the first round of shooting and red color for the second round. That will be able to show you how far or how close you are to the bull’s eye after every exercise!

Set the zero/sight from multiple distances.

Another way to know if you are making progress is to sight from different distances and angles. If you manage to hit the target from all these points, then that is a pointer that you are performing well. On the contrary, if your shots miss the object, then you will need to do more on your sighting and shooting skills!

You can start zeroing from various ranges such as 20 yards, then proceed in multiples of ten until you reach a maximum point! Assess your accuracy in all these distances.

What is the difference between sight and a scope?

People use the two terms interchangeably, but there is a difference between them. A sight is an optic that does not have a magnification lens.

A scope, on the other hand, has a magnification lens. However, in regions such as the United States, they commonly use the word rifle scope instead of sight.

So, in conclusion, the terms might mean the same thing, but in definition, there is a difference. It depends on which side of the coin you are speaking!

Zeroing the scope is not a difficult task. The first step is to mount the gun first before beginning to sight. From there, you will have to set it in a steady position and look through the scope. Load the gun and make a few shots while making necessary adjustments to the setting.

As an Amazon Associate, the opticsguides.com earn from qualifying purchases.